Thank you for your patience while we retrieve your images.

That experience left my grandfather with nightmares that forced him to relive each bombing every night for the rest of his life.

In Missions, 1945, I combine images taken at Angel Island, CA with painted diagrams, comics, and handwritten notes found in my grandfather’s B-29 Gunner’s Information File to explore how the remnants of traumatic events in our lives affect us and those who follow.

I chose to photograph Angel Island because it is a place full of ghost images. The Immigration Station, nicknamed the “Ellis Island of the West,” actively detained thousands of Chinese immigrants, and later, during World War II, Japanese POWs. Fort McDowell served as part of the San Francisco Port of Embarkation, shipping more than 300,000 soldiers to the Pacific Theater of Operations, the theater in which my grandfather fought.

When I am working, time slows down. The world narrows to just me, my subject, and the camera. I use this to explore my subject until I discover the pattern they use to interact with their world. The images that emerge are windows into that experience. I share those windows with viewers in hope that they too can recognize these windows, and share the experience of the suspension of time.
All Images © Cheye Pagel 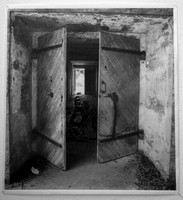