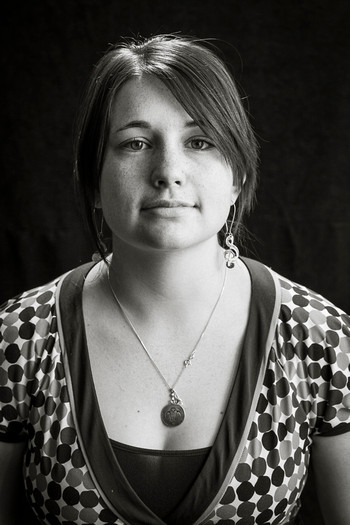 I came to photography during my senior year of high school, just after my grandfather died, and I’ve been hooked ever since. At that time, I mainly focused on photographing abandoned buildings and places. I wanted, and still do, to bring the general public’s focus to the forgotten and passed by and to show them the beauty in the left behind. Once I got to university, I started going outside of my comfort zone, going into the studio and photographing nudes and doing documentary work that required that I talk to people. I’ve never lost my affinity for the abandoned, however, and those places are often the first things that catch my attention, no matter where I am in the world.

As a photographer, I understand the need to know how to work digitally. In our fast changing technological world, skills like knowing how to roll film and process it chemically and how to make a photograph appear in the darkroom are fast becoming obsolete. While I do photograph digitally, I much prefer black and white, analog photography. The connection I feel with this older side of photography is much stronger than any connection I have with digital.

Some of my recent work encompasses my desire to photograph the old and weathered and it’s interaction with the modern day. I spent six months in Edinburgh, Scotland, UK, and in my time there, I photographed Scottish ceilidh culture, both a key part of Scotland’s vibrant history and a thriving sub-culture in modern day Edinburgh. I also photographed Greyfriar's kirkyard, a graveyard considered one of the most haunted places in the UK, where ancient and weathered tombs are viewed by hundreds of people each day. This is the place that gave JK Rowling Voldemort’s real name, Tom Riddle, and a place where ghosts interact with the modern public. In Scotland, the one place in the world where I felt truly at home, history melds seamlessly with modern day life; it’s a place where a modern farm has ancient Pict standing stones on the property and where the past is celebrated, which is my favorite thing to show in my photographs.

During my final year at university, I realized that in photographing these places, I was actually attempting to photography myself, but in a way that didn't require that I leave my comfort zone. Consequently, I decided to delve into the realm of self-portraiture for my senior thesis project. This went through many stages, from setting up shoots in abandoned buildings throughout New Mexico to photographing inside my house, and finally, to simple portraits where I made myself confront memories of things that affected me negatively when I was a child. I wanted to produce images that were both intensely personal and global; images that would resonate with those who have gone through similar things.

Currently, I am working on two different projects. One of them is a continuation of the project, Reveal, where I photograph others who have gone through trauma. The second project incorporates the art form of Japanese and Chinese calligraphy in analog photography.